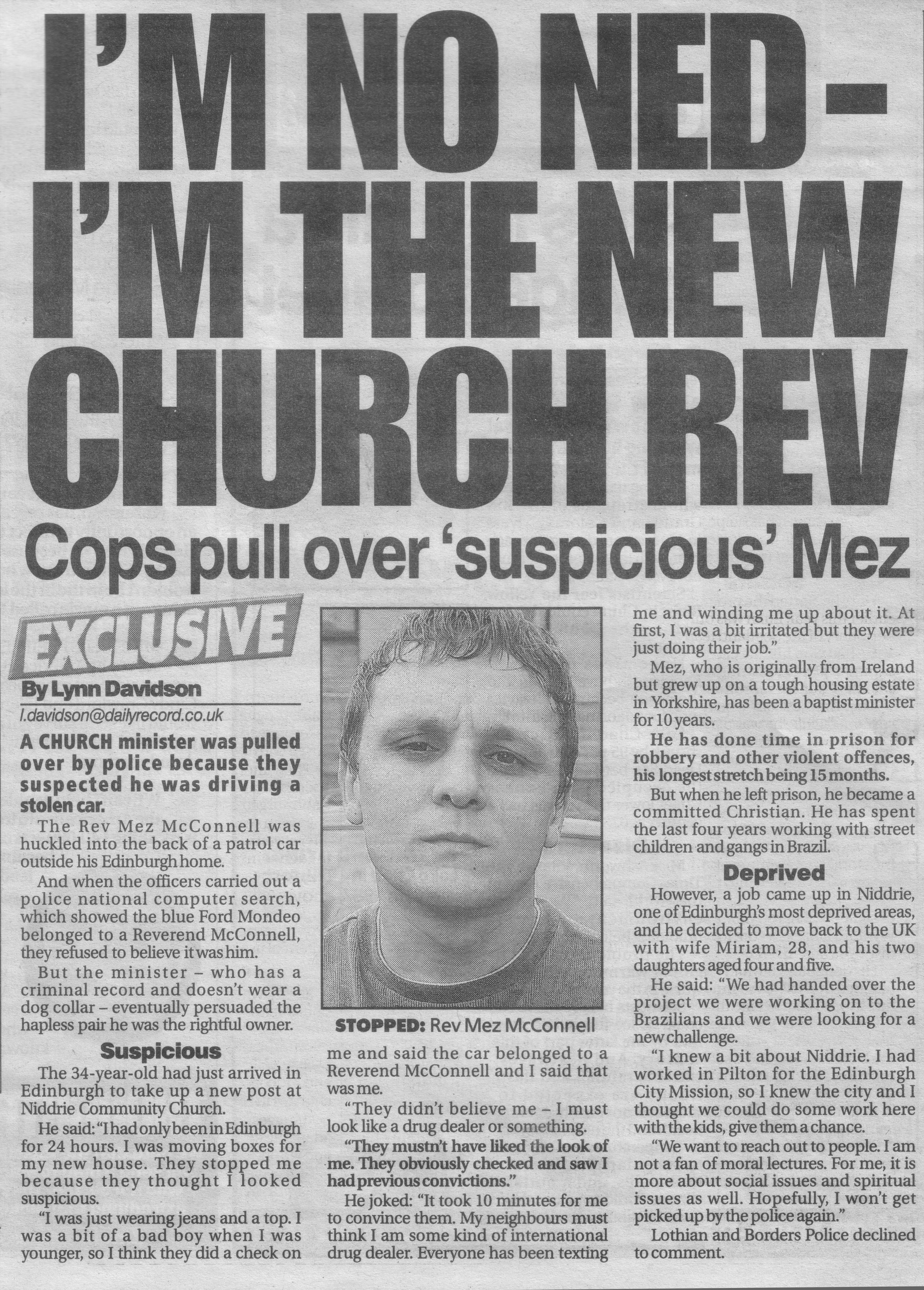 OK, so this isn’t exactly new news, but it is very funny none the less and well worth a read – click on the photo to see an enlarged copy.

This is from Scotland’s Daily Record newspaper on 3rd September 2007, describing a memorable incident that happened shortly after Mez took up his new post as pastor of Niddrie Community Church.

He was pulled over by the police because he looked a bit dodgy (still does by the way)! Things didn’t get any better for Mez when the police national computer search revealed the rightful owner of the car to be the Reverend Mez McConnell. It took Mez 10 minutes to prove his identity and convince the police that he was the Rev. Mez McConnel!

In a culture where people are suspicious and disrespectful in general when it comes to any authority figure, especially the police, they certainly did Mez a bit of a favour here. They inadvertantly:

Unfortunately much of the ‘gospel content’ of Mez’s interview didn’t make the editorial cut of this national newspaper, but it still served a meaningful purpose.

People relate to Mez in the community: he breaks the stereotype of the typical church minister; he understands their mind-set; and in a culture that likes to hear peoples’ stories, Mez is first-hand evidence of the power of Gospel, through faith in Jesus Christ, to bring salvation and transformation to even the toughest of nuts.

What about those of us who don’t have Mez’s testimony; those who, like me, have had a fairly normal, even sheltered upbringing: can and should we be concerned with building our own ‘street cred‘ in a community like Niddrie?

“Street Cred: Commanding a level of respect in an urban environment due to experience in or knowledge of issues affecting those environments.” (www.UrbanDictionary.com)

Well, for what it’s worth, I think we can, and should, so long as we’re not bringing the gospel into disrepute, or allowing popularity to be an idol in our hearts.

The Apostle Paul used whatever he could to his advantage to win the lost. He used his Jewish credentials (‘cred’) among the Jews to win the Jews; among the non-Jews, he became like a Gentile to win the Gentiles; he says: “To the Jews I became like a Jew, to win the Jews… I have become all things to all men so that by all possible means I might save some” (1 Corinthians 9:22). How does a Jew (Paul) “become a Jew” when he already is a Jew? Well, Paul’s identity in Christ supersedes his old culture; the Gospel disengages him from his own culture and frees him up to engage in other cultures.

Generally, people will give you the time of day if you’re open, authentic and have a genuine concern for them. A number of school staff members have commented on the church’s youth work and involvement in the community and have been impressed at the way we try to make a positive difference in people’s lives. Living out your faith in community is a very powerful witness.

However, we need to be careful that credibility or popularity doesn’t become an idol, and something that you hunger for, over and above your relationship with Christ. Paul’s ultimate goal was not to achieve credibility or respect in the eyes of man, but to win these men by the Gospel for the glory of God!

By the way… if you want to know how you’re faring on the ‘street cred’ front, you can score yourself using this guide from Urban Dictionary. This is obviously an American scoring system. On a Scottish housing scheme it would be as follows: