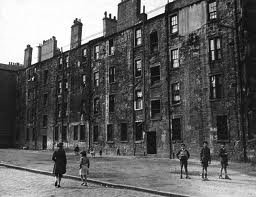 Despite all the policy changes and some great progress in the inter war years, slum housing still remained a problem throughout the UK at the outbreak of WWII. There is a clip from the BBC archives here on some of the Scottish housing built in the 20’s and 30’s. The end of WWII brought with it a chronic housing problem due to wide scale bombing and damage of many cities (over 25% of British homes were destroyed). The government’s so-called ‘temporary’ solution at the time was to build factory made prefabricated houses to try to cope with the ever increasing demand. However, many of these (often substandard) houses remained in use right up until the 1980’s. Here is a clip of post war housing in Scotland.

The New Town’s Act was passed in 1946 and was meant to deal with the problem of slum housing and city centre overcrowding.

14 new towns were planned in the 1940s and another 14 built in the 1960s. New towns contained a variety of house types. Shops, schools and leisure facilities were within easy reach. New towns were built in Scotland at Cumbernauld, Glenrothes, Livingston, East Kilbride and Irvine.

The 50’s and 60’s saw wholesale changes to the British housing landscape as council after council demolished their stock of old, terraced houses and replaced them with ‘high rise’ flats ( tenements/stairs/apartments). In fact, they became a central feature in most of the UK’s ‘council estates’ and ‘schemes.’ Once again, community living took a back seat to social policy and many thousands of people were left lonely and isolated in these buildings, even if perversely, they lived in far better conditions. Then, in the late 70’s and 80’s, the UK government introduced a ‘right to buy’ initiative for many of the schemes as well as seeking to redevelop these places through private housing associations and private building contractors.

However, for most of the twentieth century the responsibility for the majority of social-housing projects lay with central government and local authorities. From the inter-war period until the 1980s, social housing effectively meant local-authority built, owned and managed housing. Of course, originally these places used to be bastions of respectability for the working class man and his family and were marked by perfectly trimmed lawns and net curtains hanging from the windows. Problems soon became apparent as ‘urban blight’ set in and many of these places were left to decay and rot over a period of decades. Abandoned buildings became a feature, particularly on the estate I grew up in. Schemes began to be marked by rising crime, violence, the explosion of the drug scene, gang culture and a lack of economic stimulation. This led to many empty properties becoming ‘squat’s and places in which to buy/sell/take drugs.

Opinions on housing schemes differ depending on your life history and experience of them. I was dragged up through the gutter, so my view is somewhat coloured compared to a person who grew up in a ‘respectable’ (had a job and both parents) household on the same scheme. Nowadays, there are still vestiges of working class people, sometimes holding down 2 or more jobs as they struggle to pay the bills often dealing with an ever-increasing credit problem. Hand in hand with modern redevelopment we have an influx of middle class social climbers. In Niddrie, young professionals getting on the property ladder, are buying over priced flats and houses from property developers. They’re bringing with them their worldview, often not understanding fully the nuances of entering a tight-knit scheme community where families have lived for generations (our scheme is over 100 years old). Then we have immigrants flooding in from around the world, met with suspicion and derided for ‘taking our jobs’ (usually by people who haven’t got one, want one, or would even consider doing the jobs that many of these people do). We also have the ‘benefits class’ who have been on social security handouts for generations. Even when they do work, they still claim benefits because it is seen as giving it to the establishment.  For them the feeling of entitlement is all pervasive. Work is anathema and they are incredulous at the suggestion that they might have to earn the benefits they receive. All of this fed by a pill culture that is commonplace, coupled with a criminal underbelly that deals in street drugs, prescribed medication and stolen goods as a matter of course. Far too many people are ruled by fear, control and the ideal of not being a ‘grass’. Back in the golden days people were proud that they could leave their back doors open. Nowadays, the only people who can do this, perversely, are criminals or those who come from a ‘known’ family. Schemes, then, are a real mixture of people. To some they are places of horror, to some places of terror, to some places of hopelessness but to many millions more they are ‘home’.

Previous
What is Happening to the Church? Food For…
Next
The Growth of The Internet in the Last 10 Years!