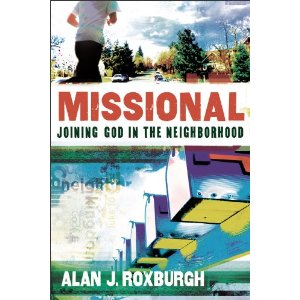 Right, where to start with this one? I have to say that I am still unsure what I think about this book. It is peppered with the usual painfully trendy phrases you associate with people who make a living out of, ‘having a conversation’ and ‘not starting with the answers but seeking to find the right questions.’ There are great claims about deconstructing what we think about being the church etc. In fact, the author goes to great lengths to persuade us that we have been too ‘church centred’ in our approach to mission and evangelism for the last 30 years and what we all need is a good shake and a radical rethink. He doesn’t really explain what this means and to be honest it just left me scratching my head.

He sets out his store by claiming that the real question we should all be asking is: ‘what is God up to in our neighbourhoods and communities?’ He then proceeds to discuss something called the ‘Language House’. To be honest, yet again I got a bit lost here and I don’t know if it is because I lack the mental capacity to grasp the concept or whether my ‘pretentious – ometer’ kicked in. Apparently a language house, ‘predetermines how one sees the world or reads a text.’ (p65) Sounds suspiciously like a sexy phrase for presuppositions to me! Anyway, he takes his language house and proceeds to spend chapters and chapters building a language cul-de-sac.

To be fair to him, there are some real glimpses of light and helpful, if not somewhat obvious, insights. For instance, he encourages us not to objectify people and to be better listeners – not exactly groundbreaking stuff! Perhaps his weakest link is his ecclesiology. Now I know he thinks we’re too church focussed but he didn’t seem to communicate very clearly what his position was – although I suspect this was his painfully angst, driven purpose ( I may be wrong there).

Some of his sentences just left me baffled. For instance, ‘Listening into speech involves the skill of creating the spaces where people can give voice to their anxieties, hopes, fears, as well as the music that lies beneath. This is the reason leaders need to be more like poets than program designers, more like creators of the unpredictable than fixers of the static.’ (p176)

How about this one? ‘Often the problem is not that the people are resistant to change; it’s that they haven’t been given the chance to imagine alternatives or empowered to their own work of discovery through experimenting.’ (p176)

Deconstruct that language house at your leisure!!

I feel I need to say something positive to end. I enjoy a good burger and even though it took 184 pages to get to the point, I agree that it is a great idea to invite your neighbours around for a BBQ. Interesting in places, although it makes far too many assumptions about what churches are like. There is better stuff out there in my humble opinion. One to miss.