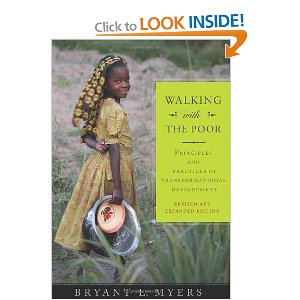 I bought this book with no little excitement given the list of theological luminaries that have recently been recommending it as a must read. Ron Sider, for instance, calls it: “probably the best book on how to do holistic community development.”

There is no doubt that it is certainly comprehensive in its treatment of the issues, certainly far more than any other book I have read to date on the issue. It’s chapters on ‘Poverty & The Poor’ (Pp115-148) are particularly detailed and helpful as they help us to discover who the poor are, who they are not, what poverty is, the cases of poverty and even the poverty of the non poor.

Ultimately, this is a book about (1) ‘Transformational Development’ which Myers describes as, “positive change in the whole of human life materially, socially, psychologically and spiritually.” (p3) It is also about (2) ‘Christian Witness’ which he describes as, “my being compelled by to share the good news that God has, through His Son, made it possible for every human being to be in covenant relationship with God.” (p4)

Obviously, this is too vast a book to justice on one meaningless little blog in cyberspace but I will try to at least engage with the parts that I remember most both positively and negatively. This is a book replete with real pearls of wisdom. For example, when speaking of many people’s desire to try to solve poverty by increasing material wealth, Myers is scathing: “research shows that when the poor receive additional income, the extra money is spent on festivals, TV’s, medical emergencies, alcohol, tobacco, and better tasting but not more nutritious food.” (p39) I would say that this is often a charge levelled at our benefits culture here on the scheme (something not tackled in the book). The more benefits they get the more they spend it on rubbish (or so the argument goes). However, it is not just the poor or the benefits ‘scrounger’ that make these errors but, according to Myers, it is a Western cultural problem. “We in the west often make unexpected and seemingly irrational choices when it comes to how we spend money on food and other things. Our spending choices are not always consistent with what we know is best for us; why should we expect the poor to be any different.” (p39) Or even the benefits class for that matter. Although I am sure an argument can be made for those of us who ‘waste’ money are at least wasting it having earned it in the first place!

There were some startling statistics with regard to global income. for instance:

“The good news is that the percentage of people living on less than $2 a day has dropped from 95% in 1820 to 43% in 2008 (World bank 2008). In the almost 25 years between 1981 and 2005, the absolute number of people living in absolute poverty has dropped from 1.9B to 1.4B (25%) with the largest declines in China, India and, more recently, Brazil and Indonesia (World bank 2010). The good news is that development assistance is at its highest in history. The number of non-poor in the world is also at its highest in history. the not so good news is that they are struggling with obesity, consumerism, and a deteriorating natural environment.” (Pp44-45)

In His chapter on ‘Theology, poverty and development’ (pp47-103), Myers revisits familiar ground concerning the ‘evangelism v social action’ debate. Still, it makes for interesting reading, particularly the section that deals with the importance of the Trinity in our understanding of human need. “If human beings are made in the image of this triune community, then our understanding of the individual must be very different from the autonomous, self-determining individual of Western culture.” (p60) In another place he appeals to the creation mandate and the principle of stewardship as proof that “the right to use is prior to the right to own.”

So far so good. Then I run into some problems. “On the cross, in addition to cancelling our sin, Paul tells us that Christ disarmed the powers and authorities, making a public spectacle of them (Col. 2:20). In Christ, we no longer have to accept the rule of oppressive structures or of deceiving and dominating social systems. Their transformation is also included in Christ’s finished work.” (p75) A couple of points here. Firstly, it is Colossians 2:15 not v20 that talks of Christ defeating the principalities and powers. Secondly, the text is referring to the rebellious satanic horde, making the last sentence in Myer’s quote something of an exegetical stretch. Paul, who lived worked and suffered under one of the most oppressive regimes in history and yet did not utter one word about resisting human authorities, powers and oppressive systems.

His discussion on the role of the church and transformational development is an interesting one. Positively, Myers is clear:

“God brings the kingdom (of God); it is neither our task nor that of our transformational development. We must not put the weight of kingdom building on our shoulders; we cannot carry it nor are we expected to. Development workers as Christians need to embrace the fact that their local community of faith is the local church wherever they work among the poor.” (p77)

He goes on to warn, rightly I think, of the dangers of para-church organisations who have separated themselves from the local church. However, he does not really go on to explain and/or investigate how these two can be brought closer together or how we practically address the ongoing debate in this area.

In his chapter on poverty and the poor (Pp105ff) he reminds us that we must fight against our tendencies in the West to look down upon them and even attempt to play God in their lives. He also challenges the assumption, again, that just providing materially for the poor will somehow not make them poor anymore. He helpfully looks at the various ‘clusters of disadvantage’ that poor have to face, including; material poverty, physical weakness, isolation, vulnerability, powerlessness and spiritual poverty (p115). All of these are helpful in trying to find a more comprehensive diagnosis of the problem of poverty. He is spot on when he says on page 133 that how we view the cause of poverty will affect how we respond to it. So, for example, if we see poverty as a sin issue then our response will be evangelism and uplift. However, if we see it as a problem with social structures then we will work to change them.

I will leave the last word on affirming the role of the church in transformational development. “At the end of the day, the work of holistic mission belongs to the church, not the development agency or the development professional per se.” (p191) He goes on to quote Newbiggin:

“It is surely a fact of inexhaustible significance that what our Lord left behind him was not a book or a creed, not a system of thought, nor a rule of life, but a visible community…He committed the entire work of salvation to that community…The church does not depend for its existence upon our understanding of it or faith in it.” (Pp191-192)

In my humble opinion, the local church is the key to any real, lasting societal transformation. More than that, church planting in housing schemes has to be the strategy for reaching the poor and vulnerable in the UK. Not for the aim of social transformation but for glorifying God through the gospel of the Lord Jesus Christ and living as a redeemed community in the midst of broken and lost people. I would recommend that you buy the book if you are thinking about working in poorer areas (or even if you are not). It is a long read, and sometimes complex, but it is worthwhile engaging with the issues. Yes, there are some frustrations and weaknesses, but there is very little like it on the market right now that is seeking to engage with these issues from an evangelical perspective.