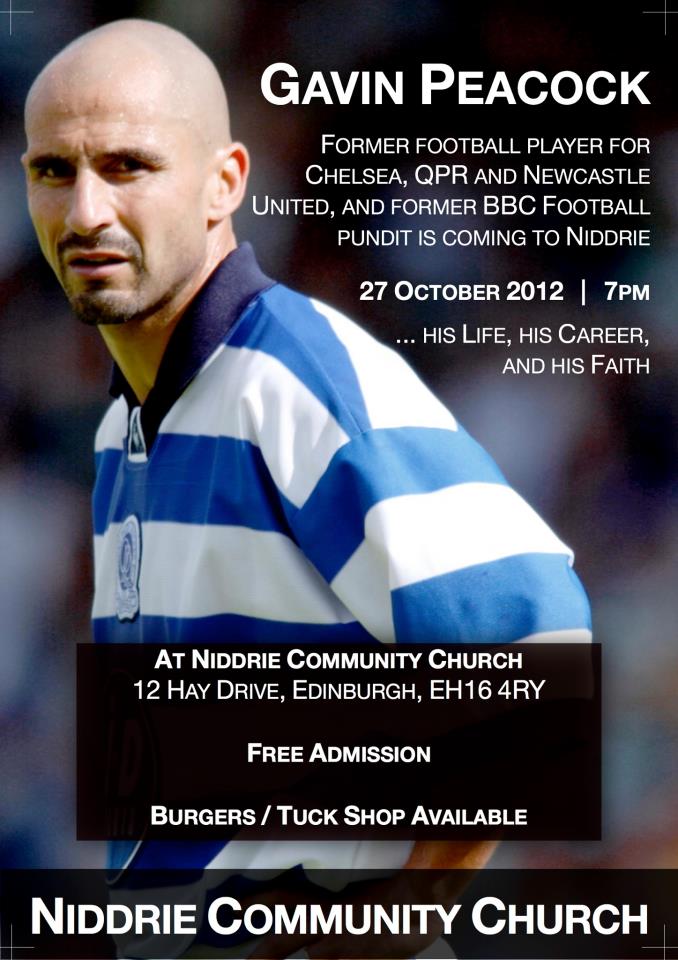 Football is the language of the schemes. Almost everybody here has a team. In Edinburgh it is Hibs or Hearts. In Glasgow it is Rangers or Celtic. Of course, here teams are divided down religious lines: Catholic or Protestant. Regardless, people love their football here in Niddrie and it has been a good medium for me over the years to share the gospel. In about 2 weeks time we have Gavin Peacock coming to Niddrie. Throughout a distinguished playing career in England, Gavin Peacock’s faith was an integral part of who he was. Upon retiring from the game, the former Newcastle, Chelsea and QPR star realised that his future lay in Christianity and in spreading God’s word. Hear his remarkable story in ‘Gavin Peacock: Leap of Faith’.

1984-87 The midfielder begins his career with Queen’s Park Rangers, making his debut on 29 November in a 2-2 home draw against Sheffield Wednesday, aged 19.

1987-89 After a brief loan spell, he completes a full transfer to Gillingham, joining his father, Keith, who is manager. Peacock Snr is sacked soon afterwards but Gavin remains with the Gills for nearly two years.

1990-93 Following a year under Harry Redknapp at Bournemouth he is signed by Newcastle United. Peacock plays a crucial role as they win the 1992-93 First Division title, scoring 12 goals. Despite promotion to the Premier League with the Magpies, he joins Chelsea in the summer for £1.5m.

1993-96 Peacock scores on his Chelsea debut, a 2-1 home loss to Blackburn Rovers, and is one of the star performers in an otherwise disappointing league campaign for the Blues as they finished 14th. Peacock hits the bar in the 1994 FA Cup final as Chelsea suffer a 4-0 loss to Manchester United at Wembley. He goes on to make over 100 appearances for the club.

1996-2002 Moves back to QPR for £800,000 following a loan spell. Goes on to make over 200 appearances and score 39 goals in total for the club, but was unable to help the side back into the Premier League. Has a brief spell on loan in 2001 at Charlton Athletic, where his father Keith was assistant manager, before retiring at the end of the 2001-02 season.

Here’s the highlights of one of my favourite games against my beloved Man Utd. Enjoy Gavin’s reaction to the penalty at 1:31. Then we see him again with a tame header at 6:27. All that hair must have put him off balance 🙂