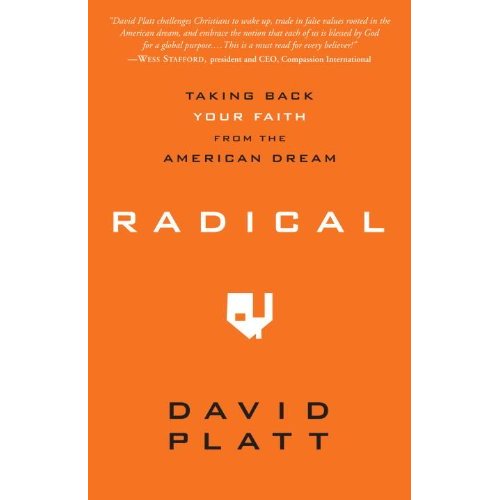 As with all books there are fans and detractors. I am reserving judgement until I have read the whole thing but I have to say, being a fan of polemics, that I am mightily impressed with the first few chapters. Given all the wishy-washy lovey dovey rubbish being spouted these days by so-called evangelicals, it is nice to read guy unashamed by the hard truths of the gospel.

‘What happened at the cross was not primarily about nails being thrust into Jesus’ hands and feet but about the wrath due your sin and my sin being thrust upon his soul. In that holy moment, all the righteous wrath and justice of God due us came rushing down like a torrent on Christ himself. Some say, “God looked down and could not bear to see the suffering that the soldiers were inflicting on Jesus, so he turned away.” But this is not true. God turned away because he could not bear to see your sin and my sin on his son. One preacher described it as if you and I were standing a hundred yards away from a dam of water ten thousand miles high and ten thousand miles wide. All of a sudden, that dam was breached, and a torrential flood of water came crashing toward us. Right before it reached our feet, the ground in front of us opened up and swallowed it all. At the Cross, Christ drank the full cup of the wrath of God, and when he had downed the last drop, he turned the cup over and cried out, “It is finished!” This is the gospel. The just and loving Creator of the universe has looked upon hopelessly sinful people and sent his Son, God in the flesh, to bear His wrath against sin on the cross and to show his power over sin in the Resurrection so that all who trust in Him will be reconciled to God forever.’

Now, shoot me, but who amongst us cannot say amen to that. Whatever this guy is trying to say, he is not watering down the fundamental doctrines of our faith. It’s not like this guy is going to be invited over to Steve Chalke’s house for canapes and a nice discussion on substitutionary atonement is it? Rob bell he is not. So, despite its obvious simplicity and lack of theological punch thus far, I am going to give this guy a real shot and read this book carefully. His context is quite obviously different to mine and he is arguing against a consumerist American culture that is permeating the church out there. But it is here in one form or another.

I do agree with him that we do have a tendency in the West to gloss over the harder sayings of Jesus such as Luke 14:26, ‘Any of you who does not give up anything he has, cannot be my disciple.’ The danger, in my circles anyway, is to hide behind our (legitimate) ‘road to Corinth’ hermeneutic and various cultural and contextual gymnastics, and water down to such an extent this radical call to discipleship that it loses all force and meaning. So, often what we have, is a rigorous biblical exegesis with little or no practical content. We can tell you what every Greek word in Luke 14:26 means, how many times it is used in the Bible, who quotes it the most and all sorts of other little tricks BUT WE ARE CLUELESS ABOUT HOW TO APPLY IT BECAUSE IT SOUNDS SO RADICALLY AT ODDS WITH OUR CHRISTIAN CULTURE TODAY THAT WE ARE LEFT SUSPICIOUS WITH A SIMPLE EXPLANATION SUCH AS: JUST DO IT!!

That being said, there is an even-handed critique here from Kevin DeYoung about this book here. I know that often this means that people end up reading the critiques rather than the book itself because our culture also likes to let others do its thinking. But buy the book, if this stuff interests you. Listen, its only 3 quid on kindle. Give it a bash.

This website uses cookies to improve your experience while you navigate through the website. Out of these, the cookies that are categorized as necessary are stored on your browser as they are essential for the working of basic functionalities of the website. We also use third-party cookies that help us analyze and understand how you use this website. These cookies will be stored in your browser only with your consent. You also have the option to opt-out of these cookies. But opting out of some of these cookies may affect your browsing experience.
Necessary Always Enabled

Any cookies that may not be particularly necessary for the website to function and is used specifically to collect user personal data via analytics, ads, other embedded contents are termed as non-necessary cookies. It is mandatory to procure user consent prior to running these cookies on your website.